All incoming rescue pigs should be dewormed upon intake. This is protocol for all pigs regardless of deworming history, diatomaceous earth use, natural dewormers, exposure to other pigs, veterinary records, indoor/outdoor status, pregnant, nursing, or seemingly good health condition. Following this schedule will help keep your existing herd healthy and start the incoming pigs on a parasite prevention program.

This schedule is recommended regardless of pig’s history because pigs that were single house pigs, never outdoors, previously treated, or treated with DE or other natural dewormers were brought into rescue with the assurance they were parasite free. Once the rescue or new owner dewormed these pigs the evidence was clear. Large numbers of dead worms were found in the stool as the medication began working immediately.

Internal and external parasites do not always show up on skin scraping tests or fecal exams at the veterinarian. In addition, these parasites are sometimes present on the pig in small enough numbers that they do not cause obvious symptoms. When these pigs are introduced to other pigs the parasites are contagious. When pigs are carrying parasites without symptoms, they may appear healthy. However, when their body or immune system is stressed or weakened it gives these parasites an opportunity to take advantage and wreak havoc on the health of the pig. The only way to ensure new pigs are parasite free is to deworm them.

Swine veterinarian Cathy Zolicani, DVM, recommends two dewormers, ivermectin and fenbendazole. These are best given at least two weeks apart in order to give the pig’s system a chance to eradicate the parasites treated. Then, ivermectin and fenbendazole should be given alternating every 3 months. Regular deworming will prevent the parasites from building large numbers and cross infecting other pigs.

Treating the pigs with both dewormers is important because neither medication covers all parasites. Where ivermectin fails, fenbendazole comes in. Where fenbendazole fails, ivermectin comes in. Together, they treat and prevent a wide variety of parasites. They are both sold over the counter and online. Both medications are safe and recommended for pigs 6 weeks and older as well as pregnant or nursing pigs. 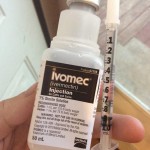 Injectable 1% ivermectin formula for swine. When injecting the medication, follow label directions. Alternatively, this medication can be used orally. Cathy Zolicani, DVM, a well-respected swine veterinarian recommends injectable 1% ivermectin at 0.2 ml per 10 lbs. body weight given orally. Simply mix the measured medication with an appetizing snack. Pastries, yogurt, or canned pumpkin easily cover the bitter taste of the medication. The first dose should be given the day the pig is rescued. A second dose should be given 10-14 days after the first dose to ensure any newly hatched mites or lice are eradicated.

Ivermectin comes in a bottle with a rubber stopper and aluminum ring to seal it. You will need a syringe to measure the medication at each dose. If you choose to inject the medication you’ll need a needle syringe. If you choose to give orally, you can use a needle syringe to poke through the gray rubber stopper on top of the bottle. Alternately, you can use needle nose pliers to peel the aluminum ring off, remove the rubber stopper, and measure the medication with an oral syringe. Be sure to put the rubber stopper back on for hygienic storage. Store bottle at room temperature away from light. A 50 ml bottle will cost $25-50 depending on area and place of purchase. This will last years for a normal household. Rescues with a larger number of pigs will use it quicker, but each dose is typically only a dollar or two. 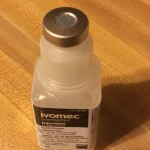 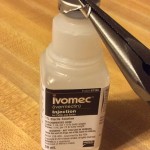 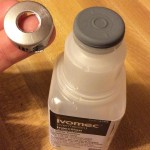 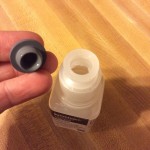 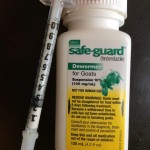 Cathy Zolicani, DVM, a well-respected swine veterinarian recommends the 10% oral suspension labeled for goats, given orally 0.1 ml per 10 lbs body weight. This dose should be given three days in a row. Another three day dosing schedule should be repeated 14 days later if parasites are suspected. The medication can be mixed with pastries, yogurt, or canned pumpkin for easy dosage. Store leftover bottle at room temperature. This bottle is typically around $20 and will dose quite a few pigs, or dose several pigs repeatedly.