Home / From The Heart / Rescue vs Collector

The age old struggle. It’s easy to spot a well-established and respected rescue. It can be a bit more difficult to see through the charade of a collector.

We see this problem in all areas of animal rescue. An animal lover with a seemingly huge heart is saddened by the suffering of the many homeless, abandoned, or neglected animals. She decides the natural path is to rescue them from harm. Surely she can provide better care and environment for those animals than they currently have, right?

Unfortunately, this is not always the case.

Too often, people with huge hearts and the best of intentions end up in over their heads. For some reason, instead of standing up, taking charge, getting needed help, and changing the situation, they continue to flounder while adding more animals that they cannot care for. The #1 rule of rescue is do NOT take in an animal unless you are physically and financially able to care for him. Collectors do not abide by this rule. The end result is long term suffering of the pigs. Many times this includes moral and financial support from unsuspecting donors.

Collectors are a very particular type of person: One that habitually collects beyond their means and capacities. This does NOT include good responsible rescue organizations or sanctuaries that fall on hard times. Collectors depend on social media to gain momentum and collect animals. They often times do not own their own home or have a job. They do not have the financial security. They may suffer from mental illness or drug abuse. Their animals may be prone to mysterious illnesses or sudden unexplained deaths. They often have emaciated animals that have not been cared for properly but they avoid posting those photos, or angle the photos to hide the reality of their animal’s health. Collectors do not have the financial stability or responsibility to establish themselves as 501c3 nonprofit through the IRS. They often have crisis after crisis, never assuming responsibility for anything that has gone wrong. They are often the first to jump in and offer a home to a pig in need, yet they will need gas money and other financial help just to bring the pig home.

DO NOT SUPPORT COLLECTORS! If nobody asks questions such as “how will you afford a lifetime of care, food, housing, veterinary bills, and more if you cannot afford the gas to pick up the pig or the bill to spay the pig?” then others will undoubtedly jump in to support this collector, morally and financially. Through this support, the animals suffering continues. Sometimes it is an urgent situation with a pig in need.

People often think any home is better than the neglect they are currently facing, especially an animal lover such as this. The reality is that the collector is a particularly selfish person. She is thinking of her own desires and wants to have this animal even though she cannot care for it properly. If a collector takes in another animal they are not only setting up that animal for longer term neglect and later abandonment or seizure, but the additional mouth to feed also puts a strain on all the other animals already in her care. 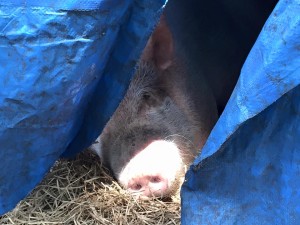 RED FLAGS OF A COLLECTOR: