We love hearing of Rescue Success Stories! If you have a special story to share of your experience rescuing a pig, please email story and photos to [email protected] Let’s show how rewarding these deserving pigs are!

Penelope was being a pig purchased from a greeder; she was a part of the teacup piglet scam. Penelope 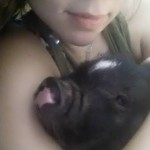 was said to be 4 months old, but was really more around 2. She was being kept in a 2 bedroom, 1 bathroom apartment with a sq.ft of about 700. There were two litter boxes, two pee pad spots, 2 cats and 2 dogs living with her.

Penelope was being fed cat and dog food and whatever else she pleased. Her playpen/bed was full of cat litter and Penelope did not seem happy where she was at.

We paid $250 to rescue her out of that situation, and we rehomed her to a friend who raises pigs on a hobby farm for free. Penelope is not at risk of being bred, eaten or treated poorly.

I have 2 rescues, one I got from a Facebook site. He was so constipated from dog food his butt looked as if it was going to explode. I bought him anyways, not knowing if he’d even survive. Didn’t feed him anything but greens for a couple days and finally he pooped, his butt went back to normal and now he’s a healthy happy mud rolling piggy, Piggles.

The other, Miss Piggy, I bought of a guy raising Potbelly’s for sausage, he said they make the best sausage. He had 4 in a little 4×4 truck bed full of poo and nastiness. He fed them road kill and rat poison to worm them. I paid for her by the pound, her eyes where so kind but she was so scared. I could only afford to help 1 and she spoke to my soul. So we paid for her and brought her home. She was terrified of humans and is still skeptical of some but will now take treats from my hand and is getting better daily. She gets to root and eat grass now like a normal piggy.

I have two off the top of my head that had a HUGE impact on me and what I do. Pearl was my first, the pig that is what MTP is based on. A little bitty 80lb pig that grew into a 300lb matriarch of a movement. Literally. I would love for her story to be known. She’s gone now almost three years but to this day if there’s a doubt of any sort, whether it be with my own pigs or with someone asking questions of me I always ask WWPD? What would Pearl do?

And Forrest Grunt, who fell into my lap at one of the darkest moments, when I’d begun to make arrangements to 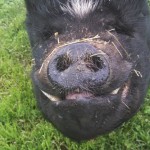 place my pigs and stop this rescue work altogether.

The ferals are way up there too, but they’re not technically minis. LOL

The other was a little PBP that came to the clinic I worked at with a broken leg. None of the vets I worked for had ever pinned a leg on a pig before but Dr. A did it. And the pig thrived. He was the very first PBP I ever met and even though he screamed BLOODY MURDER every time we had to work on him, I was hooked.

I’ll say something that has occurred to me many times over the years. I don’t believe in accidents or coincidences. Things happen the way they’re supposed to, and we’re given what we need to deal and to make something good come of it, no matter how bad a situation is. Over and again my most important animals have come to me in the midst of things that should have made me crumble. 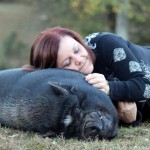 But I didn’t. And a big reason I didn’t was because I had a challenge from one of the aforementioned pigs, or in the case of the ferals, it was 4 pigs. It’s a quirk of mine, both a blessing and a curse, that if I’m told I can’t I’ll drive myself and everyone around me nuts until I figure out how I can. I thrive when I’ve got to think out of the box and solve problems. So I got sent problems. LOL Big ones! Perfect problems for whatever situation I was in.

It takes hindsight to see it in action. In the middle of it you’re too close to appreciate the choreography at work, but when the dust settles and all is right with the world, I look back and think WOW. I did it. Thank you God for the opportunity. Thank You for sending me exactly what I needed, when I needed it to move forward when I was stuck.

Thank You, above all, for trusting me to use these weird skills I have to make my little corner of the world better.

This is Wilbur, he was rescued at just a few days old. He was extremely sick, couldn’t breath without struggling, had a temp of 105, was having seizures, and couldn’t walk properly.

He is now almost 4 months old and doing so much better. He still has seizures *the cause is unknown* but is an extremely happy, spoiled, and other than that healthy cubby boy. 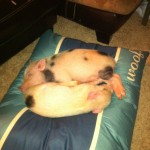 loose at a high school. We spayed and neutered them and found a very loving home for Axle. We kept Rose but she ended up passing of a seizure unfortunately a couple months later.

A friend saved our little man Oliver and I am grateful to her every single day!!! He is such a handful but worth every second of mischief! He is truly a blessing to us and is a member of our family.

This is Herman. We rescued him at 2 weeks old! It certainly wasn’t easy, but he made it. He is now one 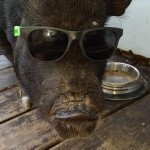 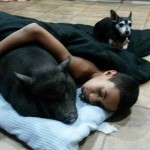 This is charlotte she has such a connection with our kids who we have adopted. Autism, Asperger’s, seizures, ADHD, PTSD, behavior and learning disabilities. She has such a way with these kids she should be a therapy pig. 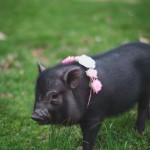 Stella lived in an apartment for the first few months of her life and never went outside, and ate dog food. She now lives on my farm in the country with room to roam and a special diet of pellets and veggies. Her life before wasn’t horrible but we are happy to have her. 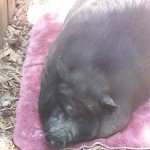 My Sissy Sue. I drove over 1800 miles to pick up this 2 /12 yr old 220 lb baby back in April. First off …she came from a very loving Mommy in OH but I was lucky that her Mommy who already loved and spoiled her let me bring her home to GA to live because of circumstances beyond her OH Mommy’s control. I now share her life still as much as possible with her original Mommy Ana Anthony. This baby girl now tugs at my heart strings every day and she is now loved also so much here in GA.

Rosie was rescued from a livestock kill pen she was very overweight, fat blind and aggressive. We were her 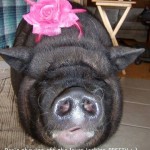 3rd home. I’m happy to say though she is blind she is doing great loves her belly rubs and is much loved like she deserves!

Ruby was so overweight she could hardly walk when coming here. They fed her chips and locked her in a 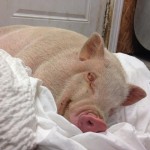 We rescued Lucy last year. She is from a broken home. Her family was going thru a divorce. Originally purchased from Texas Teacups for $1000. The husband had her the last 6 months before we got her. He threw her out a 20lb bag of dog food once a week.

I rescued this perfect little angle in August 2014.. She was 5 months old and the people that previously had 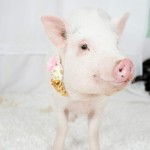 her said they just did not want her any more… They posted on a local Facebook yard sale sight and I was so scared someone would get her for all the wrong reasons.. I have always wanted a pig since I was 6 years old when we had a mommy pig give birth and died.. We bottle fed and raised the pigs.. When they were old enough they sold them… We had pigs for years and that was the last batch after Babe died… I did my research for years but nothing could prepare me for this… We have had our ups and downs and many hours of training.. No one ever told me the love form the pig was stronger than any other type of love from any other animal… She truly is my best friend! 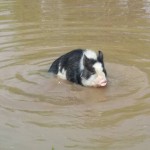 This is Batman. His previous owners got him, knowing nothing about mini pigs or the stuggles that can come with them, and they ended up begging us to take him. He’s almost 2 years old; he loves making new friends, swimming in the lake, taking walks, riding the golf cart, and chasing his dogs. He also likes to go inside the neighbors houses when they leave their doors open! He can tear up a yard like nobody’s business, but he’s cute so he gets away with it!

Roman is an unplanned rescue! We got him 2 weeks ago. Didn’t take for 5 minutes for the 2 of them to get 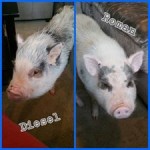 along. He is very skiddish and will occasionally swipe at us but over all nice and loving and I know with our gentle hands but firm reprimand he will trust us and stop his attitude. We had him neutered bc I knew when he left us I wasn’t going to let anyone use him for breeding. I have shared his story with a few people as we have been looking for a home for him. The last person I talked to which was only the 2nd or 3rd person we have talked to about Roman is very excited to meet him and potentially take him home. It made me sad to talk to her about him. I told my husband I wasn’t sure if I could do it unless he goes to our good friends which is another family that wants him. I know how they treat their animals. He will be very loved and have 40 acres to roam.

Well his bottom has been itching and we had to rush him back to the vet bc I thought it may have been a hernia. It wasn’t. He did rip a stitch but nothing has come out. It was either fat or a blood clot bc it did bleed. Anyway – I have determined that after being Sr least his 3rd family in a matter of 2 days we aren’t moving him anyway else. He is staying with us. I’m unexpectedly excited about it and can’t wait for our future with 2 piggles.